little mr. j and I went to the library this week and they had a very cool interactive display to celebrate.
They had taken different books that have been banned, wrapped them in brown paper, and put a description of why the particular book had been banned on the front. On the back, they put the title and author-and a sticker saying "This book is for display only.  If you would like to check out a copy, please see a librarian." I laughed, because I had just wondered if we checked it out, would we get to unwrap it.
little mr. j grew very impatient of my interactive display explorations.
I was having fun guessing the titles & giving myself little "yay, me!"s when I knew which book it was.
He wanted to know why I was so interested in those wrapped books.
"Why did they put them out there?"
"Why are you looking at those? "
"Why are they wrapped?"
"Do we get to unwrap them?"
So I tried to explain what a banned book is to an almost five year old.
Tough concept.
He nodded thoughtfully through my words and said, "oh."
As we were walking away he said, "We should really check out some of those books for little mr. b."
I asked him why.
He said,
"Because he's in band. He's in that class at school. They are banned books and they would help him."
I love how four year olds think.
So here's my banned book week gift to you:
That little man mentioned above brought a library book home from school last Wednesday.
(We like libraries.)
It was called Wacky Wednesday by Theo. LeSieg. (Do you know who that is? Hope so.)
The theme of the book is to look for something wacky in the illustrations.
Each two page spread had a certain number for the reader to discover. There are two on the following page (one half of the two page spread), but my son found three (which made a total of four, which didn't follow what the words were saying). See if you can find them: 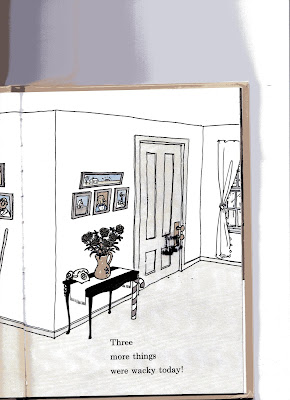 Did you find an interesting table leg and two door knobs?
Did you see the black ooze coming out the middle of the door?
I don't think the illustrator & author really planned on it being there.
What could it be?
When we turned the page, we found out.
This book hasn't been banned, just censord with a sharpie.
And they forgot to edit the words to
"In the bathroom FIVE." 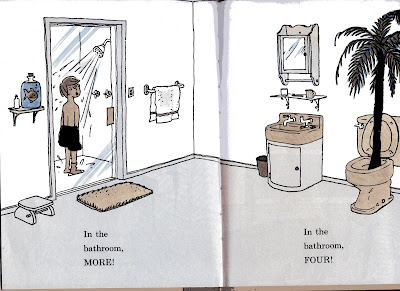 Because it is really wacky to shower with sharpie undies on.
Really.
For more information on Banned Book Week, visit the American Library Association's website.
at September 29, 2010