Whoop there it is

Last weekend he told me his team lost because he missed two free throws. I told him they probably lost for a lot of other reasons too. I didn't know for sure because I'd only heard the 7 year old's version of the game as I was with miss s in Utah and missed the game. But I was told all about it later-according to my mr. - whom was very fired up about certain aspects of the officiators' using the rules towards the two teams fairly and equally- there were a lot of other reasons they lost the game. Phew. I'm kind of glad I missed it.

So today we went outside to practice shooting (specifically foul shots) and he was having quite a hard time getting the ball into the basket, so I gave him a suggestion.

Apparently I have some latent basketball coach skills and now you know. Booyah, you've become versed.

We play that team tomorrow at 11am.
I will do best to keep my mouth shut. 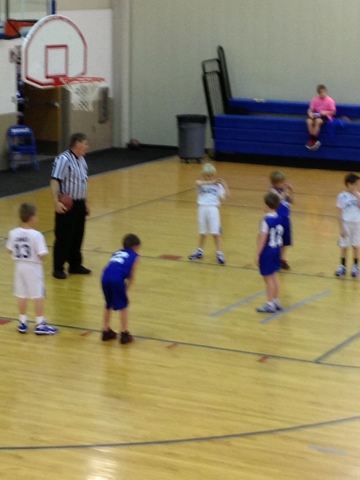