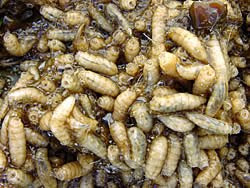 Picture from here.
Because I may be feeling morbid this week.  Because you need to know what happens when little mammals die in your walls or floors or somewhere near you.  Because I am trying to stay at a certain caloric limit today.
This post shall be about maggots.
Two years ago, I had a run in with the maggots.  Big, big creepy maggots.
Backstory:   Two years ago, my mr. was living in Oklahoma working and I was living with four children (and apparently some other things) in Texas because of a work, school, and selling the house situation.  It lasted for 7 months. I believe we have overcome the trauma that this time wreaked on our family, but at the time it was quite an adventure (code for "oh my word, are we going to survive this?").
More Backstory:  Many, many adventures took place right before and during this time period.  Too many to tell you all, but here's a couple that have to do with the house-
Let's just say that it is no longer code for water heaters to be placed in the attics of two story homes without some expensive attachments and you had better be sure that the drain pans don't have holes and if a certain teenager's bedroom door (right below said water heaters) doesn't seem to open and close as well as it used to, then there might be a problem.
(And it happened with both water heaters--I know-two water heaters-it was Texas, give me a break.)
And all of my homes now and in the future will have lever type faucets so as to make it easy for little hands to be able to shut off the faucet easily because when a faucet is left on in the upstairs bathroom draining into the drain that the airconditioner runoff also drains and that drain is clogged with the yuck that grows when the person who (or whom?) is in charge of the maintenence decides to skip the monthly pouring of the bleach that kills the yuck, the resulting flood is not nice to deal with. (That one happened before our 7 month adventure.)
I believe it all started with the snake that got stuck in the outside airconditioner fan. Or maybe it was the rat that was the target of the snake that got stuck, but didn't die.  Until a neighbor (or my mr.) took a shovel to it.
But it pretty much ended with the mouse that I thought was a rat that was the host of what this post is really all about.
The maggots. Back to the maggots.
I was sorting laundry in my first floor master bath (because we had a lot of laundry and I could fling dirty clothes and the floor was tile and if anyone came over, I certainly was not going to invite them into my bathroom, so they wouldn't see the mess--lucky them).
At a certain point, in the jeans pile, I saw a cream colored half-inch, thing that didn't look like it belonged. So I walked over there to get it, to throw it away.  I began grumbling because when I finally figured out what it was, I knew we had a situation to deal with.  The clothes had come from someone's upstairs closet and that room wasn't clean.  The house was going on the market very soon.
Oh baby.
Mommy was not looking forward to dealing with this.
Then I saw more on the floor.
Then I felt I tiny tap on the back of my head that was looking down at the floor.
Then I put my hand to the back of my head and just about threw-up right there.
Then I looked up.
Those little creepies were falling from my ceiling!
EWWWW!
Then I laughed.
I went and got a garbage bag, tape, and step stool.
Very carefully, and tightly, covered the fan and the vent with the bag hanging down.
Those little guys dropped right into the bag & I was so glad I taped it tight, because-those little squirmers could climb.
EWWWW!
Then I laughed.
When I would come in the room, they would writhe around and make the bag crinkle.
And it was a white bag, so you could see them wriggleing around and trying to escape.
I laughed.
And then we figured out how to solve the problem.
And then when the problem came out from between the floors, all evidence of the maggots having squirmed away, with a couple of really huge flys trying to escape out the window, it was a tiny little mouse.
Then I laughed.
Here is what I've learned:
-there are some very gross pictures of maggots out in the internet world, I found a nice one for you-don't go looking-they are just gross
-I shouldn't judge my children's laundry
-nature has a way of dealing with life and death (yes, I knew this, but when I was tapped on the head, it hit home)
-you can find a solution to most problems if you look hard enough
-the trials you go through before others prepare you for what might come next
-once you are able to laugh, it gets easier
arthropods household wisdom