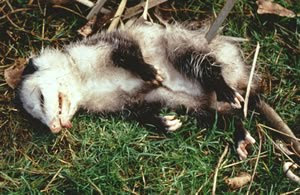 Picture and a load of information about possums can be found here.
(information like --poop, prevention & their legal status--very important stuff)
I've been lying low of late. Maybe even playing possum.

Here's where we become versed on that saying.  The following comes from the website linked above.  You should visit. It's awesome possum.


“Playing Possum”
Figure 5. (The picture above)  When caught out in the daylight with little chance of escape, or when attacked, the opossum will “play possum.”


The opossum is a slow runner and when threatened will usually growl, hiss, and bare its teeth or try to escape by climbing the nearest tree. However, when caught out in the daylight with little chance of escape, or when attacked, the opossum will “play possum.” This is a surprisingly effective defense commonly seen in insects. In such cases the opossum will fall on its side, curl its body, open its drooling mouth, and excrete droppings—all to give the appearance of being dead.


While the opossum is in this state, which lasts several minutes or several hours, no amount of prodding will produce a response. Though it appears to be in a catatonic state, its metabolic processes are as high as when the animal is fully alert.

While I haven't had the physical conditions described above (ok, maybe some drooling, but all else has been in control-thank goodness), I have kind of been hiding out in my "busy" life (aka using that as an excuse) and not visiting this place.  (The last few posts were written a while ago & posted at later dates.)

I'm wiggling my ears & I think I might be back.  I hope I am, because this place is good for me.

Thank you to a sweet friend who invited little mr. j over to play.  I was going to take a nap, but a playground fall on the face by little mr. b disturbed my home alone plans and here I am.  (It would just be wrong to go take a nap when I am supposed to be keeping an eye on a child who might have a concussion.)

And, because you have been so kind to read my rodent writings, here is a funny story for you- courtesy of little mr. b. Possum themed, I promise.

Last Saturday, on babysitter running, soccer taking duty, we drove on a certain road a number of times.  On that road were two dead possums, very close to each other--posed as the picture above.  They were obviously dead. I saw red fur.

I don't know how little mr. b didn't see them in all our running on Saturday.  But on Sunday, while we were driving home from church, he saw them and he thought they were pretty funny (please don't be offended-keep reading).  I said, "Why are you laughing?  They are dead."  He said, "Don't you get it, they are really playing possum."

And FYI-I drove down that same street a couple of hours ago. One is now flat.  The other is still the same.
And more FYI-This weekend I also discovered that we have vultures in OKC.  I had been missing them desperately since leaving San Antonio & what a thrill it was to see one helping out some different roadkill near my home.  Hope it can find those possums.
And -I am hoping to get off this morbid maggot and roadkill path I've been on.  You may never visit again if I don't.