The Load He Chose - Sunday School 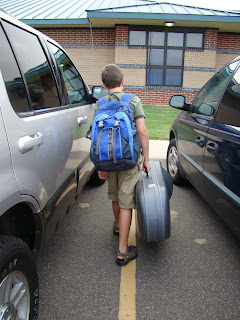 (This was the summer loaner, we have a later model at this time.)
When little mr. b came home and told me that all kids in his grade were required to take band, I said, "That's great."
When little mr. b told me he wanted to play the tuba, I said, "Really, are you sure?  You already take piano and have pretty good rythm, maybe you could do percussion." (Real meaning "Tubas are really loud and big-are you sure you want to lug that thing around?")
When little mr. b came home and told me that the band teacher had a private meeting with each child in his grade and chose the best instrument for the child, I reminded little mr. b of our previous conversation.
When little me. b came home the day of his meeting, he told me, "Mr. S thinks the tuba is a perfect fit for me."
And I rembered that some things should just be out of my control, because little mr. b wanted to play it and his teacher thought it would be a good fit and it's time for me to step aside and let things be.
But I did get excited when the orthodontist said that braces would be in the works next year. I don't know much about band, but I did think that braces would probably make blowing in a tuba painful.
Mr. S told little mr. b that it would be fine. He could keep playing. little mr. b had already checked.
I was worried about transporting that giant instrument everyday. Mr. S fixed that problem, too. We are blessed with a loaner. A loner that looks to be 100 years old and had a case bigger than my son. Whose  case take up one quarter of my little boys' room and latches cut my leg when left open and I walk by. But, he doesn't have to carry that load back and forth every single day.
And now little mr. b is practicing faithfully (when he remembers or is reminded).
We can recognize some tunes.
And he is happy.
He chose a heavy load
and I am grateful.
at November 14, 2010