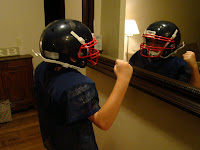 You see, that is my boy in the picture up there. He's my boy. He is playing tackle football for the first time this fall.

There would be a picture from his game yesterday, but I was gripping my camera case hard in my lap-trying to keep myself from jumping out of my seat and schooling a bunch of the kids he was "versing."

It all started at his brother's tiny tot soccer game earlier in the morning. The other team's coach didn't show, so bless some mommy's heart, she stepped in and was helping out her little son's team. That'd be great except that the officials who were scheduled to ref the little soccer game couldn't make it due to the flu and some broken body part.

Apparently, this mom didn't know all the rules like they really shouldn't be picking the ball up with their hands and there is no goal keeping in tiny tot soccer. She and our coach, my mr, did their best. During the game, I had to slap my hand over my mouth mid-sentence because of the hollering that was coming out. Why I would let something like that game get under my skin is beyond me. I was annoyed. Really, it is fun to watch those little guys and girls try to play an organized game. Developmentally they aren't to the "understanding rules" section of their little lives. It's amazing that they do what they do-and it is fun to watch the shenanigans.

So now you know where my attitude started. You also must know that I am not that competitive. They can lose. They can win. I just want them to run, exercise, and enjoy them selves. I do not know where my feelings during master b's afternoon football game came from.

You also need to know that my mr is coaching this football team, also. He was not there to talk me down.

On one of the first plays, my master b was playing offence. He had the ball. He was tackled. There was a pile of boys. Number 36 from the other team jumped on top of the pile after the action was over. That just wasn't right. Master b was on the bottom.

Another time, he had the ball and some kid from the other team grabbed his helmet (not his face mask) and took him down. It really is amazing that everyone who plays football is moving and alive.

I did not act on my feelings. Although I've been weight lifting, I don't think my physical strength is that capable-yet. I have seen a new side of myself.

My mama bear stayed hidden, but she growled. And her voice was loud.