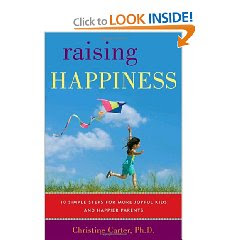 Find the book here or at your library.

A book that I'm going to look into.
(because you see, I am still traumatized by the events that unfolded in yonder post yesterday & the dramatic behavior by two people immediately after arriving home from school today)
(and I'm not saying I'm not happy-I am-I would just like more inner parenting peace)

Two Simple Ways to Be a Happier Parent.

When Christine Carter became a parent, she realized that her work as a sociologist who studies happiness gave her a head start on being a good and happy parent. Rather than trying to solve problems in her family, she wanted to prevent them. That got her wondering what makes for happy families and children. The result of that questioning is Raising Happiness (Ballantine Books).


The book is chock-full of words—gratitude, forgiveness, optimism, and inner peace—I associate more with meditation than parenting manuals. But it's not at all woo-woo. Carter grounds her path to happiness in solid science, including behavioral psychology, which explains why praise is much more powerful in getting children to behave than punishment or nagging. Many of the findings are surprisingly simple. For instance, would you like to know the one thing that will make children do better in school, help them have fewer emotional problems, and make them less likely to become obese or have drug or alcohol problems? Eat dinner together as a family.


Science and simplicity in the service of happier families: That sounds like a winner. So I called up Carter, executive director of the Greater Good Science Center at the University of California-Berkeley, and asked her how I could start making my own family happier.

She said to start off by asking two questions about your life as a parent:

1. When are you happiest with your kids?

2. What part of the normal day with your family routinely causes suffering?

Then make sure your day is structured so that you get routine, habitual happiness and so that you're eliminating habitual pain.

Carter says that when she asked herself the second question, she realized that she hated getting her two daughters out the door for school. "Every single morning I was yelling at my kids [at] approximately the same time and for the same reason," she says.

So she decided to restructure those mornings so they'd be a shared joy, or at least neutral. The science of changing habits says you have to start off supersmall and build over weeks to a bigger result. So she had the kids put their shoes by the door the night before. In the morning, "I ended up setting a timer," Carter says. "It goes off twice. The first time it goes off, it means clear your dishes and go brush your teeth. The second is walk out the door to the bus." By the next morning, she says, "we didn't have such a bad morning. We had taken the first step."

Just as she changed the family's daily routine to make that one stressful period less miserable, Carter also focused on amplifying the moment that gives her the most joy in parenting. "For me, the most joy always comes at the end of the day when I'm putting the kids to bed" and they're telling me about their three good things [that happened in the day]. That's my most luscious thing, the thing I enjoy the most." To make sure that she didn't miss out on that moment when she had to work in the evenings, "we just moved [that bedtime routine] to after school. They sit on the couch with me and cuddle, and we read a book and they tell me about their three good things."

Carter says that despite her deep knowledge of the science of happiness, she doesn't always do the right thing as a parent. "It's part of the journey, an incremental improvement process. But it's amazing to me how much this stuff works when you have the intention to have a happier morning," she says.

That's my challenge for the week: Make a happy moment with my child part of our routine, and engineer out one annoying bit of parenting. And I challenge you do to the same, too. What will be your happiness moment? What suffering will you avoid?
at March 03, 2010