We went to Hell this weekend

And we took the family.
Really, it was called Hotter 'N Hell 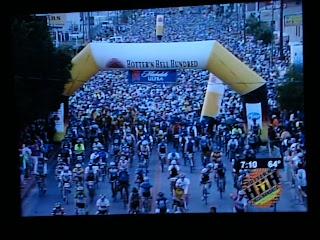 This is a picture of the picture on the television, which I turned on
after I drove to my friend's house, picked up her, her husband and
his bike and drove close to the beginning of the race.
Thank goodness they are locals and know the backroads and ways to get
around the traffic- because those bike people are crazy.
There would have been a picture of my mr getting the bikes on the rack in the dark,
but it showed our license plate and I'm paraniod about that kind of stuff.
So, unless you are my mother in law, you aren't going to get to
see that one. 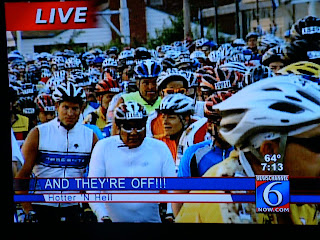 We dropped the guys off, I took my friend home & went back to the hotel.
To cuddle my little son and go back to sleep.
But first, I wanted to see the start of the race.
And I'm glad I watched it on television.
my mr was in "gate three"
He passed the starting line at about 7:30am.
The race cannon went off at daybreak (it was about 7:10).
I'm glad my friend was wise and suggested that we just drop them off.
I think I saw more on the tv than I would have down in that mass. 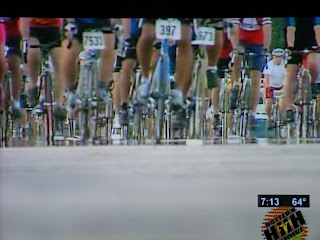 One of my children really liked saying the name of the race.
She doesn't normally use certain words.
"Hey mom, how long will the H 'n H race last?"
"Do you think Dad's liking H 'n H?"
"When we come back to H 'n H next year ..."
(big assumption there)
She doesn't know I was on to her.
But I was.
Just like I was to her younger brother.
my mr rode the HHH.
Because he is crazy.
HHH is 100 miles.
He said it was harder than his marathons.
He's telling me right now that
his muscles are not as sore as they
are after a marthon.
The reason it's called the HHH is because it is in Texas.
In August.
And it's hot.
But thank heavens,
we were lucky this weekend
and it was only in the high 90s with pretty low humidity
while we waited (me impatiently) for him to finish.
We stayed at the hotel for a while.
Then we went to play with friends.
Then we ventured down to the festivities.
And finally, he came.
In the afternoon.
And we were very happy to see him. 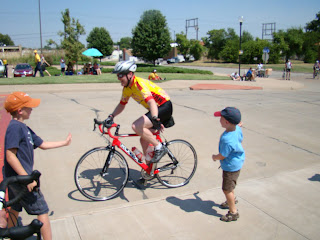 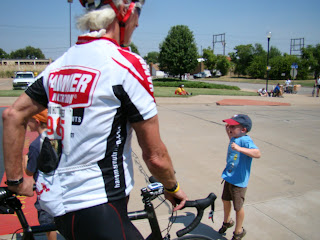 "Daddy, Daddy! Go Daddy, you can do it!"
(This little guy is a very cute cheerleader-please note the almost smile
on the man walking by in the white jersey. You have to look really hard.) 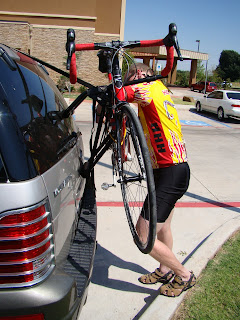 Done.
And almost ready to recuperate.
How I've become versed:
Marriage brings all kinds of surprises, you really never know what you are signing up for.
And
It's really, really nice to get to see very dear friends.
(Someday I will have to tell you about my Mildred.)
And
I don't need to set insane goals.
I will leave that to other people
And be supportive.
at August 30, 2010