Picture from here.
(This is not my honey bear. My honey bear has a yellow flat top and is not all fancy pointed head flashy like the one pictured above.)
I am here to confess that today I maimed the honey bear.
It now sits leaning forward a bit.
Kind of like my mom, after she hurt her back and had surgery in 2010.
You can't see the injury, it's just changed how my honey bear holds itself
(I don't know if it's a he honey bear or she honey bear. Not sure how to figure that one out.)
It's better than what I did to the last honey bear.
The bear that made me swear that I would never have another honey bear
because of the hurt I inflicted.
It went in the microwave.
It shouldn't have.
And it was maimed beyond standing
and had to go meet the great honey bear in the sky, or the landfill, or the recycling plant.
(I don't remember where we lived at that time- I just remember the poor crippled honey bear.)
It was a very sad day.
Until I got this new honey bear
And I did swear to care for this bear.
So, when I told myself to
"remember, that bear is in there"
as I set it in a pot of water on the stove,
to melt the honey crystals that had formed,
I was not worried about the consequences.
But I should have been.
Because, a little while later
little mr j said, "um, mom, did you know there's fire under that pan?"
I remembered that there was a bear in there.
And then he gave me lecture on how we need to pay attention
to the pan on the stove because the water could burn out
and then the honey bear would burn up
and then there would be a fire
and that would be very bad.
(Oh, he has been taught so well.)
(And don't be worried about the fire under the pan-we have gas.)
(And we've had a lot of it lately. Beware if you come to our house!)
I turned down the flame.
And checked the progress.
There was still a clump of crystal honey waiting to get warm enough to melt.
Honey bear looked fine, so I put it back in
and paid attention this time.
It wasn't until I dried it off and set it on the counter
and noticed it leaned
forward
a little
bit.
But it looked fine and didn't tip over.
I told it I was sorry and filled it the rest of the way up
and now it sits, waiting to be used
in the bread and peanut butter drawer.
( I know it's weird that we have a bread and peanut butter drawer, but we eat so much of the stuff-I wanted it to be handy-like right there in the kitchen where we are standing handy.)
And now, when I make lunches
(because peanut butter and honey are the lunch of choice around here),
I will have a fond reminder of my mom
and how sweet she is
even if she leans a little bit forward
these days.
_________________________________________________________________________________
Can you believe you just spent the last few minutes reading about a silly little honey bear?
Can you believe I just spent the last too many minutes writing about a silly little honey bear?
Oh brother.
I want you to know that this was written in an attempt to avoid writing about two stupid things that happened with my two teenage daughters a week ago Monday.
I want to write about those things, but I am afraid I will be too negative.
I don't want to be negative.
I just want to document in words what happened.
So now I am committed to you.
I will write about the two stupid things that happened.
A week ago Monday
and I won't be negative.
By the way,
our garage door opener has decided that it will open
only on certain days and times
and
I broke two fingernails today.
ouch.
family rambling 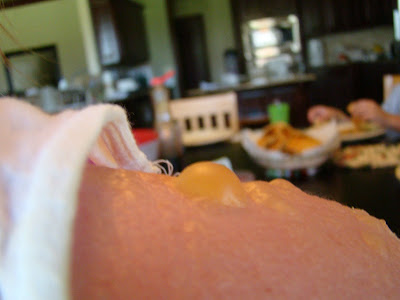