I did attempt to take the kids sledding at the bigger neighborhood hill yesterday.
It was on my list of "to dos" and they knew it, but when I asked them to get ready, they didn't want to go.
Sad.
And then an hour and a half before we needed to leave to take miss s to a lesson,
little mr. j decided that he would like to go sled.
So we went.
miss h and little mr. j were the sledders-the other two wouldn't come out.
miss s was supposed to be cleaning her room, but she was in there all day and I don't think anything got done. (But I'm not going in to find out-that whole thing is between her and her father.) And she didn't want to come with us anyway.
little mr. b was playing video games or reading. I don't know why he wouldn't come with us.

And that big hill is awesome, even if the wind had blown off quite a bit of the snow.
The kids went really, really fast and they didn't even hurt themselves on the trees at the bottom.
I am very thankful little mr. j listened to me when I told him to bail off before he hit the trees.
Nobody got hurt and we made it home in time to get dry clothes on before we needed to leave.


Did you catch that?
Before we needed to leave.
I put my brave on and drove miss s into town
along with miss h to a friend's house and the boys as tagalongs.
The main roads are fine.  The neighborhood roads are not.
But they will be by noon today (it's getting into the 40s-next week, we are supposed to reach the 70s).
We ran some errands and it was even getting dark (and cold) by the time we headed home.

I know I sound like a wimp, but you snow drivers need to know that around here-
people don't have snow tires (and-many aren't that great of drivers).
Only the main roads get plowed. And it can get very, very, very cold very quickly.
It can be a bit dangerous.
And we have to drive up a significant hill to get to our house.
(It's not significant enough to sled on, just enough to scare me when it's slick.)
And I've had enough snow driving scares while living in the Northwest, that I don't need anymore living in Central South. (Is that a good way to place Oklahoma?)

And-for your enjoyment-a photo of some very confused geese from yesterday. It was awesome. 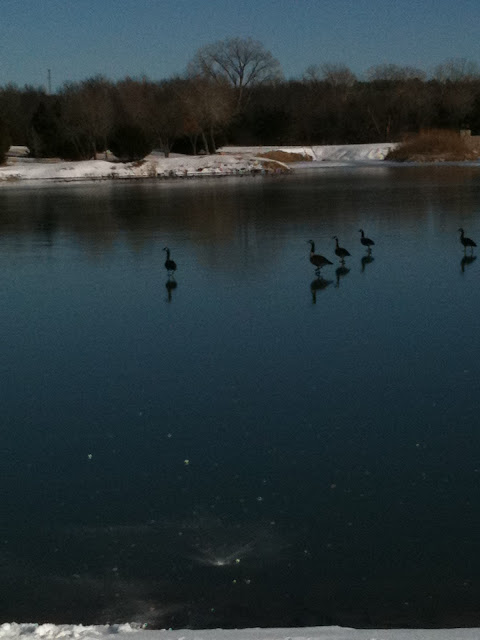 "Honk, Honk?"
"Honk, Honk?"
(photo credits to the other mom, mrs. l, who was at the hill with us and had her phone camera with her and who I had no idea who she was until after I asked her it she would please send me a copy of the picture and she rattled off my email address and then told me who she was, because I still couldn't tell because of all the snow gear and sunglasses. Thanks mrs. l!)
She also suggested that yesterday, some moms waited down at the bottom of the hill by the trees.
So I went down there, I couldn't decide what I would do if the sledders came at me.
I took the "Bail off!" option.
I suppose I could have sacrificed myself,
but as you read earlier,
I am not really one to take
risks involving my physical well being.

PS-I've wanted to write lately, but haven't made the time. Lots of ideas swimming around in my head and when I sit down to let them come to shore, they don't come in. Frustrating.
at February 11, 2011