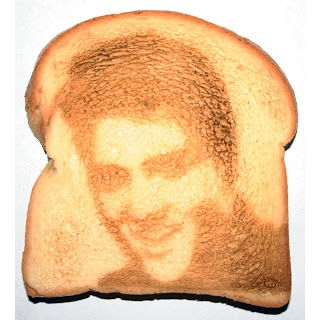 Image found here.
Today's show and tell item was supposed to start with the letter "T."
little mr. j wanted to take the toaster.
After some cajoling, he settled on toast.
When he came home he told us that, "This was the first time ever in the history of my school that someone has brought toast for show and tell."
Yay us!

And in more preschool antics, he came home with one of those very coveted tooth shaped container charm necklaces-you know the ones the spoiled kids get when they lose a tooth at school-and he told me, "Mom, Mom, I lost a tooth! [pause] April Fools!"

I wondered if his teacher might have told him to do that to get back for the toast.
(She's got a very fun sense of humor.)
(The tooth necklace was a little reward for remembering to bring your show and tell.)
(Something we've forgot in the past few weeks, and will not forget again.)
('I' is next week's letter. I suggested ice that's melted. He wasn't impressed.
He would like to bring his friend, Isacc.)

When I asked him if he heard that April Fool's joke at school, he said, "No, I made it up myself, on the bus."
Good night, we are going to have to take great care on future April 1sts.
Or else we'll be toast.
at April 01, 2011