Turkey Hunting at the School 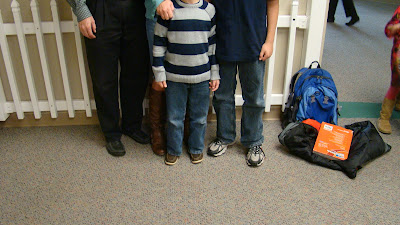 Every Thanksgiving, our school has a traditional feast that the children invite their grandparents and parents to. It's pretty amazing. Here's a link to where I wrote about last year's event and explained more about it.
I still think it's awesome. And after substituting a few times, I am thinking it's an especially ingenious way for the teachers and administrators to have the opportunity to send those kiddos home with their parents after the feast and get a little time to themselves to get things done before their holiday.

I heard that they were expecting over 1200 folks this year. Our lunch ladies rock.

This year, I attended wearing a beautiful indian corn brooch 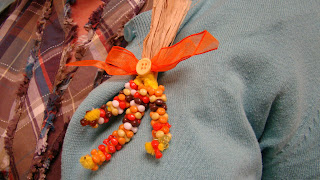 (that little mr. j wanted to give to his big brother instead of me,
but we asked his brother if he would wear it and he said no, so yay, I got it)

I came to hunt turkey.
Because next year, we won't only be doing this: 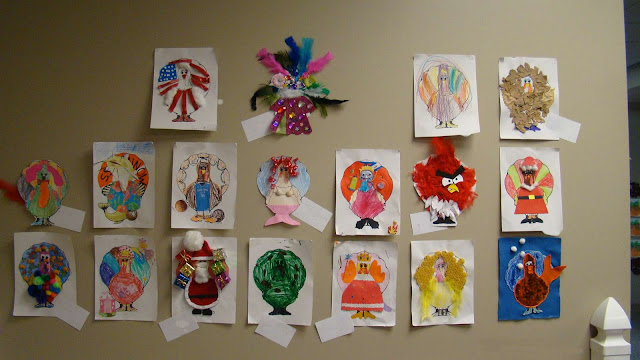 We'll be needing to make a turkey.
On my subbing days the past couple of weeks, I had been watching the first grade tables to see what came in.
(FYI- Crafty things give me the willies and projects like the one coming up next year scare me. I've been concerned since seeing our neighbor's cute turkey last year. Situations such as these require stealthy reconnaissance to prevent a project panic attack.)
They all were awesome, but there were a couple that really stood out.
And they were my prey.

But, when little mr. j was still picking at our feast and the rest of us were finished, I pulled little mr. b aside and said, "Ok, there's a turkey in here that looks like........ please help me find it."

But, apparently most all the first graders and their families eat a whole lot faster than us because when we started looking down the rows of table tops, many of those turkeys had been taken home already.

So we hit the halls.
Out of the two basketball themed ones I had my eyes on, I caught one: 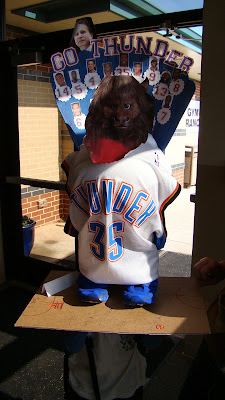 (the little shoes were painted blue!!!)

The other one used an actual basketball and net. I couldn't catch it and, after walking quite awhile with my older son, gave up on finding the one I most wanted to get.

Our family gathered our things and headed toward the main doors to begin our trek home.

Guess what walked right in front of us!
Yes!
The turkey!
(And the human family it belonged to.)
And I said, "Hey, wait, can I please get a picture of your turkey. You know- word at the school is that your Then the mom said, "Oh, so you're going to copy it next year."
And I said, "No, I'm not that good, but I want to show it to the world."
(Now, hopefully the world will come here and see it, because it is pretty cool.)

Anyway, without any further ado, I give you the prize turkey that I hunted down at the school today: 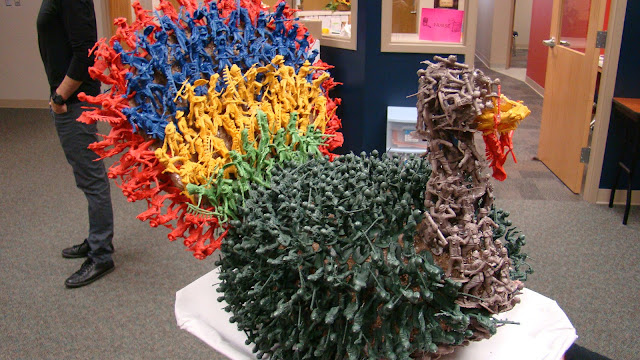 (Incredible little plastic army/cowboy/indian guy turkey - I hope they keep it forever and bring it out every year. I know I would-that's the kind of decorator I am.)

Happy day before Thanksgiving!
at November 24, 2011